Tony D’Alberto has revealed the look of his #3 Ford Falcon FG that he will carry for the first two rounds of the V8 Supercars Championship.

The Victorian driver will compete with major backing from Pferd, producers of tools for surface finishing and cutting materials, at the Clipsal 500 and the non-championship Australian Grand Prix event at Albert Park.

The TDR squad will also continue to enjoy significant backing from GB Galvinizing, who will again be represented on the bonnet.

Pferd has backed D’Alberto’s team since 2010 and he is pleased to reveal the new-car.

“I think it has come up pretty well,” D’Alberto told Speedcafe.com.

“It’s a only a short two round deal, but it’s a great opportunity for them to have the car done in their own colours. 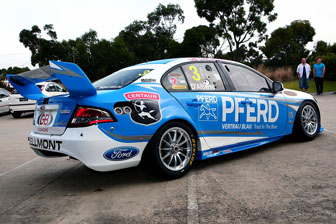 A rear view of the TDR Falcon FG

“We’re trying to encouraging to be involved at this level for the rest of the year, but we’re speaking to a lot of other people aswell.

“I think the car looks cool with their light blue on the side. We’ve just got to see what happens and see where we are at.”

D’Alberto says the best way he can convince Pferd, or another title sponsor, to join his team for the entire 2012 V8 Supercars Championship is to have a strong result in the opening event on the Adelaide street course.

“Adelaide has been pretty strong for us in the past,” he said.

“I’m confident. The car was strong at the test last week so I’m really looking forward to Clipsal. It’s great to start the championship back on home soil too. It kicks the year off well.”

The opening round of the V8 Supercars Championship will be held at the Adelaide street track on March 1-4.