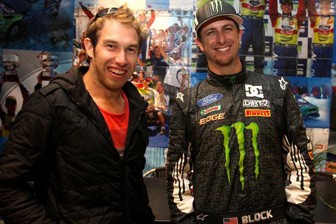 Chris Atkinson will return to the WRC with Ken Block's team

Australian Chris Atkinson will return to the World Rally Championship driving a Ford Fiesta WRC for the Monster World Rally Team next month.

Atkinson, who will partner YouTube rally sensation Ken Block, returns to the WRC after a three year absence with his last event in the sports ultimate class coming at Rally Ireland (2009) where he finished fifth in a Citroen C4 WRC despite a highspeed crash into a lightpole.

The Former Subaru factory driver will compete in an M-Sport built and run Fiesta RS WRC, the same machinery which dominated last week’s Rally Sweden with Finn Jari-Matti Latvala behind the wheel.

“I’m stoked to be back in the WRC and teaming up with Ken and the Monster World Rally Team for Rally Mexico,” Atkinson told Speedcafe.com

“I’ve finished second in Mexico (2008) and this year I’ll be competing in the same spec car that won the last round (Sweden) so I’m really looking forward to getting back into the swing of things with the best gear and guys around me.”

Atkinson had been linked to a WRC return this year with Subaru in an R4 specification Impreza but with the deal falling over at the 11th hour and was again left stranded without a drive.

Rally Mexico is a unique event which sees all crews down on power with the event held several thousand feet above sea-level.

Rally Mexico is the third round of the championship and kicks off next month, March 8-11.