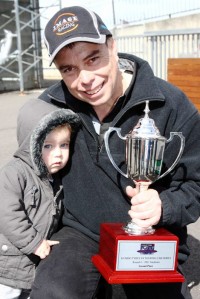 Terry Wyhoon has been involved in the racing industry for a very long time. He started out as a Speedway specialist before making his name as one of Australia’s leading AUSCAR and NASCAR drivers.

He won the coveted AUSCAR championship in 1996 and followed this up with back-to back second place series results in the Australian NASCAR championship before the series came to an abrupt end in 1999.

Wyhoon then changed his focus from oval racing to circuit racing when he was introduced to the Konica series in 2000. Steadily improving, he had a best series finish of fourth in 2002 before retiring in 2004. He then came back and raced in the then Fujitsu Series (now called the Dunlop Series) and won the V8 Touring Car Championship in 2011.

Wyhoon was brought up with an interest in racing. The family home was in the same street as a one of the local Speedcar teams, so when he had the time, and when his parents would let him, he would help out putting cars together. The interest soon turned into a passion and he found himself learning how to race.

“I did that for 11 years at all the local tracks like Nyora and what used to be Brooklyn near the West Gate Bridge (Melbourne).

“I continued to race Speedway in the dirt modified class until Bob Jane built the Thunderdome at Calder Park.”

Seeing the Thunderdome had Wyhoon intrigued, so he went to have a look at it and the cars that would race there. It didn’t take long for him to join the AUSCAR series

“I had a look at what the AUSCAR racing was all about and purchased my first AUSCAR in 1987 and that’s where it all kicked off,” said Wyhoon.

“Setting up a Speedway car or an AUSCAR built for oval bitumen racing were fairly similar.

“In-fact in the early days I had a bit of an advantage over those that hadn’t raced Speedway because it was a bit of a black art to get those cars to go around in circles fast.

“Four or five AUSCAR seasons later I won the 1995/6 title, which was massive for me at the time.”

Coming from a Speedway background and progressing straight to AUSCAR might seem a strange path for some. While Wyhoon liked Touring cars, the cost prevented him from going in that direction.

“Touring cars were of interest but the cost was out of reach,” said Wyhoon.

“In Speedway I used to buy parts from the local dump, put them on the car and be competitive.

“When I looked at the AUSCAR rules the standard VK Commodore could be used, I just needed to add a roll cage, so I thought I’d give it a crack.

“I would have liked to have given Touring Cars a go but they were too expensive and I didn’t have the money.

“To be honest though, AUSCAR and then NASCAR racing appealed to me more than circuit racing anyway.” One of the things that Wyhoon had to address was his lack of circuit racing experience. Oval racing was the norm early in his career but every so often he had to race on a circuit requiring left and right hand turning.

“On the oval it wasn’t a problem, the Thunderdome wasn’t an issue, it was a different story all together when they introduced the road racing,” said Wyhoon.

“Left and right hand turns, braking and other things; these took a while to come to terms with.

“I spent a lot of time with Steve Harrington and Jim Richards getting some road course training.

“I was much too aggressive for circuit racing and still am in a lot of ways, I break too late and slide the car, which doesn’t faze me, but it isn’t fast. I’ve had to adapt a little over the years.”

Having enjoyed success in both AUSCAR and NASCAR, Wyhoon has a soft spot for both categories, in particular the 1996 AUSCAR title.

“As far as championships go I enjoyed the 1995/96 season because it was super competitive,” said Wyhoon.

“There were 35 to 40 cars; there was John Faulkner, Steven Richards, Brad Jones and Jim Richards at times.

“There was so much competition and you had to race hard, it was enjoyable winning the title but it was a bloody hard year.”

One of the advantages of racing in those early Oval series’ was the prize money on offer, which helped finance Wyhoon’s racing program.

“It was affordable and there was a lot of prize money,” said Wyhoon.

“I used to run on the prize money when I started AUSCAR. I’d get $1500 to qualify then the last placed driver got $1500 and it went up from there. 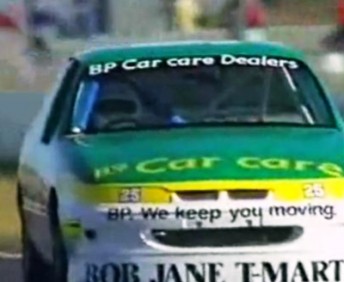 “I always remember Bob Jane saying that Formula One didn’t pay the prize money that he paid.”

Having won the AUSCAR title then coming second twice in NASCAR, Wyhoon was at the top of the game, but then in 1999 the series came to an unexpected end.

“It was all ticking along really nicely and then in 1999 Bob pulled the rug out from underneath us and it all stopped,” said Wyhoon.

“I was gutted beyond belief; I still to this day don’t know why it stopped.

“We’d built up this great team and a great sport then Bob sent me to Japan to race.

“We got back to race at the Thunderdome and it was no more, it was like (Tony) Cochrane saying that V8s were all over.

“It’s obviously not on the same scale, but that’s what it felt like.”

After the demise of NASCAR Wyhoon shifted his focus to the Konica Series (now know as the Dunlop Series).

“I still couldn’t afford to do the main series so I purchased an old VS Commodore, an old HRT car, for $50,000.

“I went to the Konica Series not really knowing what we would be up against. We rocked up to Eastern Creek in 2000 with a five speed gear box with not a lot of power and we were up against teams that had purchased cars direct from the main game teams and had six speed gear boxes and 600hp.

“It took us a while to get our heads around things but we made good progress.”

One of his highlights was at Bathurst in 2000 when he teamed up with James Brock. While he was a DNF, having Peter Brock nearby made it all worthwhile.

“Unfortunately James crashed the car, but the event was a highlight in my career because we had Peter Brock in our garage all weekend, which was wonderful,” said Wyhoon.

“He helped where ever he could and we had everything to gain and nothing to lose.

“In 2000 it pissed rain all week; it was a huge advantage for us. Having less grip didn’t bother me; it brought all the others back to us.”

Wyhoon decided to leave the sport in 2004 after having some personal problems and sat out the season. He soon came back and entered the new Touring Car Challenge series, which he won.

“After winning the Touring Car Challenge championship I decided to go back to the Fujitsu Series,” said Wyhoon. Wyhoon has raced in many different categories

“I purchased a Stone Brothers Racing AU and won a Fujitsu race at Wakefield Park.

“That was an amazing moment, but we knew we couldn’t afford to buy what we needed to stay in the series so we came into the V8 Touring Car Series, which we won last year.”

Having won the V8 Touring Car title in 2011, Wyhoon has decided not to attempt back-to back wins, instead he will run his own team.

“I have a couple of cars leased out; I have an SBR BA and a Larkham Motorsport BA.”

One of the young drivers that Wyhoon will manage is Bob Jane’s youngest son Robbie Jane.

“Bob Jane and his wife have asked me to run their son Robbie in the V8 Touring Car Series,” said Wyhoon.

“I have a three year contract with them to eventually bring him into the Dunlop Series.

“I’ll put him in my championship winning car. It’s the best car in the fleet and everywhere we go this year it won at last year.

“So I’m going to step aside at the moment and oversee everything that Robbie does.

“I also have a mechanical repair shop, so with this and running the racing programme I’m going to be extremely busy.”