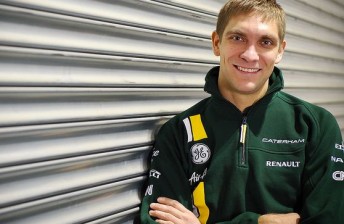 Russian Vitaly Petrov will replace Jarno Trulli at the Caterham F1 Team for the 2012 Formula One season, the team has announced.

The Lotus outcast will join Heikki Kovalainen at the third-year squad, while Trulli has been left without a ride after 15 consecutive seasons.

Petrvo, now 27, competed for the Lotus (formerly Renault) team for two seasons – scoring a best result of third in the 2011 Australian Grand Prix at Albert Park.

“This is a very exciting day for me,” said Petrov of his new Caterham deal.

“The passion and spirit that Tony (Fernandes, team owner) and the whole team have to keep moving forwards is infectious, and I am honoured to be able to join them and play my part in helping the team mount a serious challenge to the teams ahead in 2012 and for many seasons to come.

“I have been training hard all winter and am ready to get back into the cockpit and go to work. From what I have seen already, our new car is another good step forward from 2011 and now I cannot wait to see how it feels when we get to Barcelona.”

In an official statement, Fernandes paid tribute to Trulli’s efforts for the team over the last two seasons, and admitted the decision to draft in Petrov was done with ‘economics’ in mind.

“It was not an easy decision to bring Vitaly in to replace Jarno, but it was one we made to ensure that we give fresh impetus across the whole team and with a realistic eye on the global economic market,” said Fernandes.

“Jarno has an incredible natural talent behind the wheel, and his winning record and longevity in the sport will bear testament to that talent in the Formula 1 annals forever, but now it is time to open a new chapter in our team’s story, and Vitaly is the right person to help us do that.”

Trulli’s exit leaves the Formula One grid without a single Italian driver.

The 2012 Formula One World Championship kicks off at Albert Park on March 16-18.