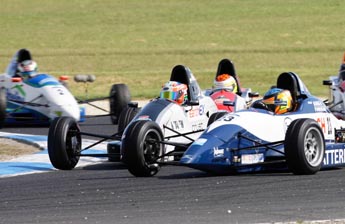 Richards is no stranger to Formula Ford competition, having won the championship in 1994 for Garry Rogers Motorosport, while these days he remains active as a competitor in V8 Supercars as an endurance co-driver for FOrd Performance Racing, the New Zealand V8 SuperTourers class, and the Porsche City Index Carrera Cup Australia.

McConville, the 1992 Formula Ford Champion, meanwhile will dovetail his own driving duties in V8 Utes and V8 Supercasr with his continued role as the Driving Standards Adviser for Carrera Cup and the Porsche GT3 Cup Challenge Australia.

The Formula Ford position will be shared between the two according to availability, and scheduling conflicts at each of eight championship rounds.

Richards sees his role as a mentor for the up and coming drivers participating in the Championship.

“Last year with Cameron overseeing the Driving Standards Adviser position, there was a marked improvement in the driver’s on track behaviour and attitude as the season progressed,” Richards said.

“With our experience we are able to help out with important decisions in race control, while at the same time we coach the drivers with an aim to improve the on track racing.

“In this role it’s great to be able to give back to Formula Ford, it should be a very competitive season.”

The Australian Formula Ford Championship kicks off at Albert Park, with three races spread over each day of the Formula One program, commencing on March 15.