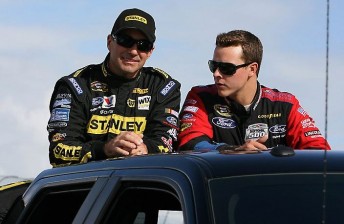 Australian NASCAR Sprint Cup star Marcos Ambrose says that racing in this weekend’s Bud Shootout for the first time will provide a boost to his Daytona 500 campaign.

This year will mark Ambrose’s first start in the invite-only non-points event.  The entry criteria has been opened up this year to include every driver that finished in the top 25 of last year’s Sprint Cup Series, in addition to previous winners of the Daytona 500, Daytona 400 and Bud Shootout.

The format for the race itself has been changed this year too, with a 25 and a 50 lap segment to be separated by a 10 minute pitstop in which crews can change tyres and fuel, in addition to making chassis adjustments.

Ambrose says he can’t wait to start the race aboard his Richard Petty Motorsport Ford.

“I’ve had to watch it from the sidelines for the past couple of years and was very jealous of all the guys that got to run in it,” said Ambrose.

“I think it is going to give me and my team an advantage having a race before the Duels and the Daytona 500. It’s going to give us a chance to get more comfortable and stay on the same page as the rest of the cars racing in the Shootout.

“I’ve got a chance to win it, so I’m very excited. It will be interesting to see how the drafting works with the new rules. It’s going to give us all a chance to really see it. It’s just going to be a fun all around race and I’m really looking forward to it.”

This year, Ambrose will also start the season’s other invitational non-points event – the All-Star race at Charlotte – for the first time, courtesy of having won a race during the 2011 season.