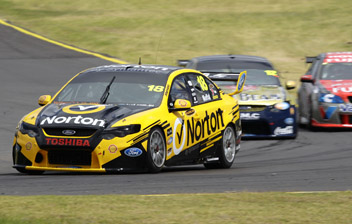 The 2012 V8 Supercars Championship may still be three weeks away, but the driver line-ups for the Sandown and Bathurst endurance races are already taking shape-up.

Three others deals have also been locked in, with Greg Ritter and Dale Wood returning to Fujitsu Racing and Tony D’Alberto Racing respectively, and Scott McLaughlin to drive with Jonathon Webb at Tekno Autosports.

Speedcafe.com understands that both the Toll Holden Racing Team and Stone Brothers Racing are close to finalising their line-ups, with 2011 co-drivers Nick Percat and Cameron McConville both being retained by the factory Holden team.

SBR meanwhile is expected to place Craig Baird, Luke Youlden and Andrew Thompson in their IRWIN, SP Tools and Lucky 7 Falcons respectively – a wholesale change from its 2011 enduro entries. 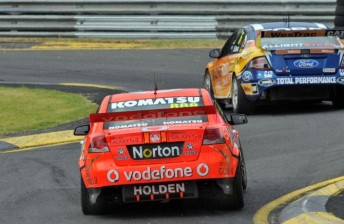 TeamVodafone and FPR have already confirmed their line-ups

Paul Morris drove the VIP Petfoods entry that is run under his Racing Entitlements Contract at last weekend’s Sandown pre-season test, and is an obvious candidate for the #49 Falcon.

V8 Supercars’ other four-car squad, Kelly Racing, could see as many as three of its 2011 co-drivers return, with David Russell, Owen Kelly and Tim Blanchard all in the frame for this year’s races. Owen Kelly enjoyed a handful of laps at Sandown over the weekend.

Cameron Waters, who co-drove a fifth Kelly Racing entry at Bathurst last year, is also thought to fit into the squad’s endurance plans, pending his performance in this year’s V8 Supercars Development Series.

Having impressed the team at last year’s Armor All Gold Coast 600, Briton Richard Westbrook is positioned as a potential left-field co-driver for Kelly Racing, having recently announced Grand Am and American Le Mans Series programs that will not clash with either Sandown or Bathurst.

David Besnard meanwhile could add yet another team to his resume, with the Queenslander being linked to a seat at Brad Jones Racing after spending recent years with DJR, GRM and SBR.

Naturally, Andrew Jones is expected to remain part of the BJR fold, while Chris Pither and Chaz Mostert are among the drivers eyeing a ride alongside David Wall in the Albury-based team’s third entry.

Shane Price, who drove with BJR in the enduros last year, was a notable guest in Lucas Dumbrell Motorsport’s garage at last weekend’s Sandown test, and could line-up alongside regular driver Taz Douglas.

While Ritter was the only endurance driver announced by Fujitsu Racing at its pre-Sandown season launch, the team’s other 2011 co-driver Marcus Marshall is understood to be the man most likely to complete the line-up.

While not currently being linked to particular seats, 2011 Fujitsu V8 Supercars Series runner-up Jack Perkins and Carrera Cup race winner Daniel Gaunt are also likely to be sought after for both their pace and experience. Last year, Perkins drove alongside Russell Ingall in Paul Morris Motorsport’s Supercheap Auto Commodore, while Gaunt teamed with Tim Slade.

The Sandown 500 will take place on September 16, with the Supercheap Auto Bathurst 1000 to follow three weeks later.

NOTE: Those in italics have not been confirmed