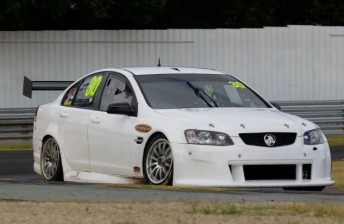 Taz Douglas in the LDM Commodore at Sandown

Third-year V8 Supercars squad Lucas Dumbrell Motorsport has officially confirmed that Taz Douglas will race with the team in the 2012 V8 Supercars Championship.

Douglas was first linked to the LDM seat by Speedcafe.com last December.

The 28-year-old drove LDM’s ex-Paul Morris Motorsport Triple Eight Commodore at last weekend’s pre-season test at Sandown, and has now been confirmed as the team’s driver for the full-season.

While LDM has struggled at the back of the grid in its first two seasons, team owner Lucas Dumbrell believes the combination of Douglas and the new car can push well into the midfield.

“I generally think we should run between 12th and 18th on the race weekends and have a couple of top 10 finishes along the way,” Dumbrell told Speedcafe.com.

“That might not be where we are at the start, but after a couple of races to get our heads around the car, I think that’s where we should be.

“I think that what he (Douglas) did in his Development Series car was impressive. He didn’t go out there and win a lot of races, but he did a good job for the equipment he had, and I rate the fact that he did a lot (of the car preparation) himself. It showed that he’s willing to do the hard work to go racing.

“I just want people around me that are hungry to get a result. I want drivers, engineers and a whole team around that generally care, and go racing because they want to get on the podium.”

Dumbrell’s car ran devoid of sponsors at Sandown, but says he will reveal a new major sponsor at a team launch next week.