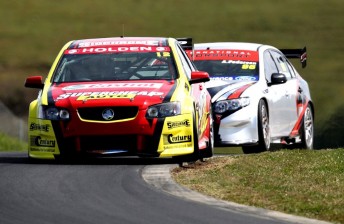 Geoff Emery is a last-minute addition to the field for the opening round of New Zealand’s V8 SuperTourers Series at Hampton Downs this weekend.

The former Commodore Cup series winner will step into the second of the Supercheap Auto-backed Melbourne Performance Centre entries that was to be driven by Cameron McConville.

McConville withdrew from the drive earlier this month in order to focus on his racing commitments in Australia.

Emery, who has competed in the V8 Supercars Development Series in recent seasons, completes the 16 car field for the inaugural SuperTourers event.

Scott had been slated to drive for Mark Petch Motorsport in the series, but has this week announced that the team’s #99 Commodore and franchise has been purchased by Bill Farmer’s Farmer Racing Services operation.

The team will campaign the car for Scott in this year’s series, ahead of a planned expansion to two cars in 2013.