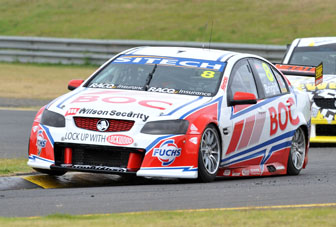 The majority of Victorian-based V8 Supercars will conduct another test day before heading to the Clipsal 500 Adelaide next month.

After the official pre-season test at Sandown last Saturday, Brad Jones Racing, Walkinshaw Racing, Garry Rogers Motorsport and Tony D’Alberto Racing will head to Winton next Monday for one final hit-out before heading to the Adelaide street circuit.

Ford Performance Racing is also set to join the test, however, it is expected that the team will only campaign its V8 Supercars Development Series car of Chaz Mostert.

Both BJR and Walkinshaws are also expected to test their DVS entries of Andrew Jones and Nick Percat respectively.

Minor rain delays at Sandown, which cost teams about two hours of useful testing, ensured that the Winton test option was taken.

For Tony D’Alberto, a steering rack issue early in the day at Sandown saw the team quickly commit to the Winton test.

“Considering all the stuff that went wrong, we decided half way through the day that we would take the opportunity to test at Winton,” D’Alberto told Speedcafe.com.

“We didn’t use any of our good tyres, so we’ll be able to do some very useful running.

“After we fixed the front of the car, it felt alright. The FPR boys were strong, which is encouraging for us.”

Will Davison (Tradingpost FPR) finished the compulsory Sandown test as the fastest driver, ahead of Craig Lowndes (TeamVodafone) and Lee Holdsworth (IRWIN Racing).

Queensland-based team Stone Brothers Racing will also test prior to the Clipsal 500 at Queensland Raceway. The Ford team will conduct its test on February 21.