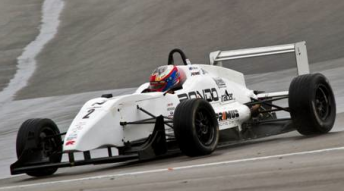 Nathan Morcom will contest this year’s F2000 Championship Series in the USA.

It will be the 19 year-old Sydney driver’s second campaign in the ‘development’ openwheeler series, which will run over seven double-header rounds from April until October.

His car will be the current model RFR chassis that he drove in last year’s final round at Watkins Glen.
Morcom is aiming for the top in the 2012 series after finishing eighth overall in his rookie season.

He made a big first impression last year by winning the opening race, but after that a string of problems with Primus’s ageing Van Diemen chassis prevented him from repeating the performance.

This year, with Primus boss Jon Baytos again engineering his car, he’s confident of being on the pace at every race weekend.

“Even though I didn’t get the opportunity to go for pole or win races a lot of the time last year, I drove enough laps to know that I can be competitive in the series.

“I already know five of the seven circuits from 2011, and the two new ones (Thunderbolt Raceway and Summit Point) will be new to most of the other drivers too.

“Ralph Firman has the best track record of anyone in Formula Ford/F2000, and Jon Baytos has forgotten more than most engineers will ever know about sorting a racing car.

Morcom flew to Primus Racing’s Ohio base last week to begin a thorough test program before the first F2000 Championship Series round at Virginia International Raceway on April 14-15.