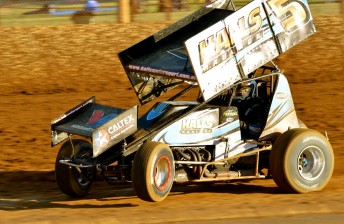 Ryan Farrell took a popular win in Bunbury's WSS round

Ryan Farrell barrelled to an emphatic win in Round 14 of Hi-Tec Oils World Series Sprintcars at Coates Hire Bunbury Speedway, steering the Halls Haulage / Bridgestone Tyre Centre #5 KPC to an all the way victory.

“I hated this car for a while,” said Farrell. “It felt like some nights it was trying to kill me. I’ve had a hard time getting my head around it for some time but we’ve persevered with it and tonight it was right on the money.”

Jason Johnson’s third place on the back of his preliminary main event win last night keeps his dream alive, albeit slightly, of running down series leader James McFadden in the final round at the Perth Motorplex next weekend.

McFadden came from the seventh row of the grid to finish seventh and survive a real race of attrition to stay 384 points ahead of his pursuers.

Brooke Tatnell was lucky to even make the first lap when unbelievably the push car vaulted up over his right rear and jammed between the right rear tyre and the top wing when he was being pushed away to start the main event.

The battle for second place in the Championship still remains on in earnest.

In a ridiculous situation, should McFadden go on to claim the Series win, the driver that finishes second will  claim the $20,000 winner’s cheque as McFadden – as an uncontracted driver – is ineligible to take it.