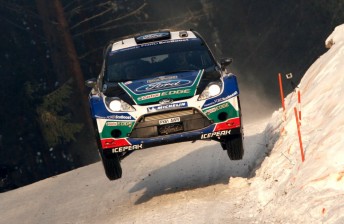 Jai-Matti Latvala on the fly in Sweden

Ford World Rally Team’s Jari-Matti Latvala has stretched his lead in Rally Sweden after an intense battle during the second leg with Mikko Hirvonen.

The Finn won four of the eight snow and ice-covered speed tests in his Ford Fiesta RS World Rally Car, extending his 16.8seconds first day advantage to 23.0seconds after a tooth-and-nail duel with his former team-mate and Countryman.

Petter Solberg maintained third in his works Fiesta RS WRC, with one day remaining in this second round of the FIA World Rally Championship. Solberg is 11.1sec clear of the privately-entered Ford of fellow Norwegian Mads Østberg, after a daylong fight for the final podium place.

After a 6am re-start from Karlstad, drivers tackled two identical loops of stages covering 117.76km before the long journey back south for the overnight halt. There was less snow on the stages than in Norway yesterday and with temperatures dipping to only -6ºC, exposed gravel broke through the ice during the afternoon tests.

Latvala was fastest over the opening two stages and the 26-year-old increased his lead to 18.6sec by the mid-leg service break in Hagfors. He was quickest on the same tests this afternoon, and managed the stud wear in his Michelin tyres perfectly to ensure maximum traction over the slippery final stage to widen his lead further.

“I knew the final stage was very icy so I tried to look after the tyres this afternoon to ensure we had plenty of studs,” explained Latvala. “I didn’t want to destroy them in the gravel. Our calculations were correct and our strategy worked well.”

He relished the close competition with former colleague Hirvonen. “It was a big battle with Mikko. The pressure was on, but I like it that way. It’s good to lead now, but I have to keep this position to the end of the rally. That’s what matters. There were some games between us before the stages. Of course we talk to each other, but the chat is more serious now than when we were team-mates, with each of us trying to gain a mental advantage over the other.

“I needed to play my cards right. Knowing when to attack, when to look after the tyres and when to change them was what today was all about. I know Mikko will attack in the morning so I can’t think about easing off. I have a bigger lead than I did this morning which gives me confidence, but I need to be wide awake from the very first kilometre,” he added. 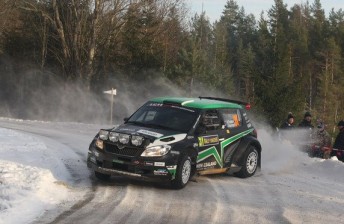 A far better day for Kiwi Hayden Paddon in his Skoda

After getting stuck in a snow bank on the opening day, Sebastien Loeb picked up a puncture and dropped behind Henning Solberg (Ford). The Citroen driver reclaimed sixth on the final stage. Evgeny Novikov is next in Loeb’s sights, but the M-Sport Ford man has been pushing hard today and is still 44.4s clear.

New Zealand driver Hayden Paddon moved from sixth to fourth in the Super 2000 World Rally Championship after a consistent day at the wheel f his Skoda Fabia. The 2011 Production Car World Champion has frustrated on the opening day after getting stuck in a snow bank and then suffering a puncture. PG Andersson heads the S2000 category in a Proton Satria.

The final day is again based close to the Hagfors service park and is the shortest of the weekend. Drivers face two identical loops of three stages, split by service. The final test of the second loop close to Hagfors is the Power Stage, with bonus points on offer to the fastest three drivers.