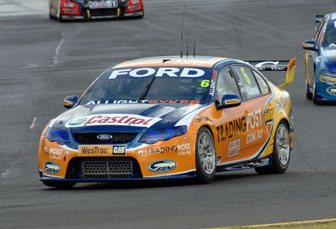 Will Davison has taken the opening bragging rights for the 2012 V8 Supercars Championship, topping the time sheets at the end of the pre-season test at Sandown Raceway today.

The #6 Tradingpost Ford Performance Racing Falcon set his fast time with 17 minutes of the session remaining. He set a time of 1m09.3230s.

The day, attended by over 10,000 V8 Supercars fans, saw rain interrupt some of the team’s running, with around two hours of their program halted.

To compensate for the lost time, the day was extended by 30 minutes, finishing at 5.30pm.

The next time the V8 Supercars will be seen together will be at the Clipsal 500 Adelaide for the opening event of the championship on March 1-4.

See below for the final result