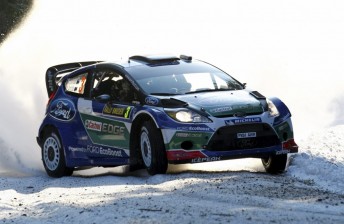 The Finn heads former Ford team-mate and countryman Mikko Hirvonen (Citroen) by 16.8sec with Norway’s Petter Solberg in the other factory Fiesta in third.

Temperatures hovered around -10ºC, enough to guarantee full winter conditions, but not cold enough to ensure the roads were pure ice. That encouraged Latvala, fastest in the WRC’s first ever qualifying session yesterday, to select a start position well down the order, with the aim of obtaining better conditions after the loose snow had been swept away.

The decision paid off immediately as Latvala was equal fastest on the morning’s opening stage before moving into the lead in the afternoon.

“My start position strategy paid off and it was an excellent day,” said Latvala.

“I made a few small mistakes this morning which cost me the lead and the car oversteered a little, but that improved as the day continued.

“Today was the hardest for the tyres but the grip remained good this afternoon. I must keep pushing tomorrow and it’s important to stay focused. Keeping clear of the snow banks will be key because it’s all too easy to be dragged into the soft snow and become stuck.”

Dramas for defending eight-time World Rally Champion and points leader Sebastien Loeb (France) who lost two minutes extricating his Citroen from a snow bank after he slid wide on one corner of the day’s seventh stage.

On the following stage Dani Sordo in the Mini did exactly the same thing. However, the snow which clogged the radiator ironically caused the engine to overheat and he has retired from the rally.