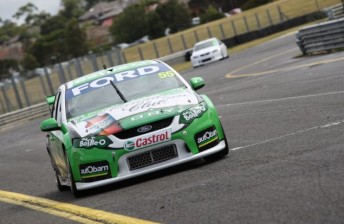 New Ford Performance Racing recruit David Reynolds has put The Bottle-O Racing Falcon on top of the time sheets at the halfway mark of today’s official pre-season test at Sandown.

Reynolds lapped the Melbourne circuit in 1:09.96s just moments before running was paused at 12:30pm for an on-track fan session.

Track conditions continued to improve throughout the morning after early showers greeted the drivers.

Shane van Gisbergen spent more than an hour on top of the time sheets after setting a 1:12.47s lap in the opening minutes before heavier rain began falling.

Several endurance co-drivers are present at the circuit, with Dean Canto (The Bottle-O Racing), Cameron McConville (Toll Holden Racing Team) and Scott McLaughlin (Tekno Autosport) among those to have turned laps.

The afternoon’s session will run through until 5:00pm.