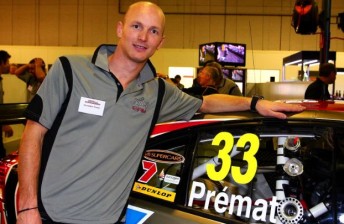 The 29-year-old has extensive experience in high-downforce sportscars, open-wheelers and DTM touring cars, and said that he enjoyed his first V8 Supercars laps.

“It was really nice to drive just to get used to the car, to get to know how to drive the car, on the brakes, on the slow corner, on the mid-speed and high-speed,” Premat told Speedcafe.com.

“It was different to how I’m used to do it, but I’m really happy to learn this car, to get used to this car and the tracks as well.

“I think I will find the best solution to be really quick with this kind of car.”

CLICK HERE for Speedcafe.com’s story on the livery launch

Premat will be joined by his 27 V8 Supercars rivals at Sandown today ahead of the opening round of the championship in Adelaide next month.

See below for Speedcafe.com’s video with Alexandre Premat ahead of the 2012 season