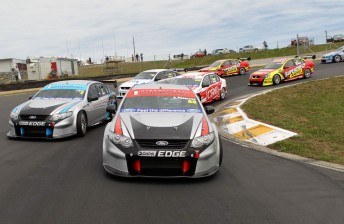 The new V8 SuperTourers class has had its first official hit-out during an all in test at Hampton Downs today.

The test has been deemed a success, with all 16 cars completing laps in a pair of two-hour long sessions.

No official times were recorded from the day.

Some of the V8 SuperTourers team had already tested their cars, but today marked the first public appearance on track of the cars of Craig Baird, Andy Booth, Ant Pedersen, Jonny Reid, Colin Corkery, Kayne Scott and both of the Melbourne Performance Centre Supercheap Auto cars.

The first round of the new championship takes place at Hampton Downs next weekend (February 17-19).