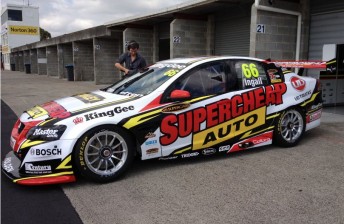 The car was launched under the ‘‘Russell Ingall Re-Enforcement Tour 2012’ slogan, which the team says will be used in merchandising and other promotional activities across the season.

Ingall had his first drive of a Walkinshaw Racing Commodore at a ride day late last year at Phillip Island, and will again get behind the wheel of his race car tomorrow for the pre-season Sandown test.

All 28 V8 Supercars will be on track for the test, including Ingall’s Walkinshaw Racing stablemates James Courtney and Garth Tander.