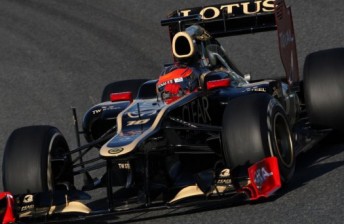 Nico Rosberg has set the pace in the third day of Formula 1 winter testing at Jerez in the 2011 Merecedes AMG Petronas F1 W02, however Romain Grosjean in his return to Formula 1 was the best of the 2012 machines in the Lotus – meantime Ferrari continues to search for performance.

Ferrari admits it is struggling to find the ultimate performance from it’s new car. Whilst fundamentally the team is happy with the reliability, getting everything working in harmony is it’s big focus. With huge hopes on the radical new design and both McLaren and Red Bull expressing happiness with their first impressions of the 2012 steeds, the pressure is on the Scuderia to deliver. Fernando Alonso managed just the seventh quickest time.

Third quickest and continuing the good pace of the Red Bull Racing RB8 was Sebastien Vettel – in his return to work for 2012. the World Champion uncovered some small teething issues with the new car – but on the whole, his first impressions were very positive.

Lewis Hamilton was fourth fastest in the stunning new Vodafone McLaren-Mercedes – stating the baseline of the car is something he is particularly happy with and that it gives the team a huge advantage in terms of what it can achieve.

Jean-Eric Vergne rounded out the top five after his 79 laps for Scuderia Toro Rosso. He was followed by Sergio Perez (Sauber), Alonso (Ferrari), Bruno Senna – in his historic first test for Williams F1 Team – and Giedo Van de Garde in the Caterham.