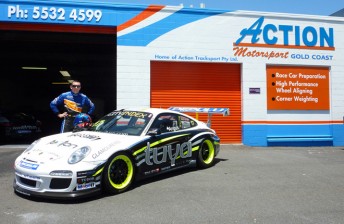 Matt Kingsley will make his City Index Porsche Carrera Cup debut on the streets of Adelaide next month when he substitutes for Series regular, Ray Angus, who cannot make the event due to business commitments.

It will be the first time that the Gold Coaster has visited the 2.5km concrete canyon since the now infamous multi-car V8 Utes accident that left him critically injured and hospitalised for six months in 2008.

Since that time, Kingsley has gone on to win the 2009 Porsche GT3 Cup Challenge in a 996 Cup Car and in 2010 finished second in that Series – again with the older model car.

“I’m very excited to be making my debut in the City Index Porsche Carrera Cup Series,” Kingsley told Speedcafe.com. “Since starting my career, it’s been my goal to race in the premier level Porsche Series. To line up alongside the likes of Craig Baird and Steven Richards – especially in Adelaide – will be fantastic.

“I have to thank Ray Angus for the opportunity to compete at Clipsal. It is one of the most prestigious events on the calendar for any category in Australian motorsport.”

The opening round of the City Index Porsche Carrera Cup Championship will take place on the streets of Adelaide during the Clipsal 500, March 1-4.