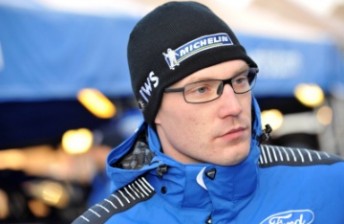 Jari-Matti Latvala has set the fastest time in the first-ever qualifying session at the Rally of Sweden outside Hagfors.

The Ford driver beat former team-mate Mikko Hirvonen (Citroen) by half a second on a 3.99-kilometre ice-coated test.

The result means that Latvala will be able to choose where he wants to start the first full day of Rally Sweden, in order to make the best possible use of road position.

“I had no problem in the stage at all,” said the Finn.

“Maybe on one corner I was a little bit slower after I saw some rocks and went around them, but otherwise it was the perfect time for me. I am happy with the time I set and the position I am in, but certainly there is a lot to be thinking about before we decide what place we take. We have to think about the weather and a few other factors: it’s not so straightforward.”

Hirvonen, the winner of the last two rallies in Sweden, edged out M-Sport’s Ott Tanak by a mere five-thousandths of a second, to claim second place in his factory Citroen. It was a remarkable performance though from the young Estonian, contesting only his third world championship event in a World Rally Car.

“The stage was pretty good, to be only five thousandths of a second behind Mikko was a good result for me,” said Tanak.

The quickest of the World Rally Car debutants was Eyvind Brynildsen, who was eight-fastest in another Ford Fiesta RS WRC, 2.213s behind Latvala. Patrik Sandell was the top Swede in ninth overall on his first run in a MINI John Cooper Works WRC.

Conditions were cold and bright on the stage, which benefitted from a good covering of snow and got quicker as more cars passed over it. The cars started the qualifying stage in championship order, meaning that Citroen driver Sebastien Loeb went first. The eight-time world champion was sixth quickest.