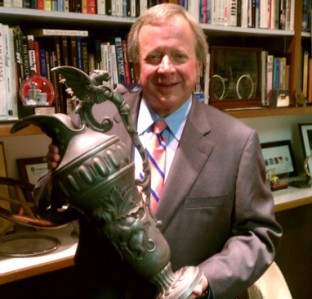 One of the missing links to Ford’s motor racing past – the 1967 Le Mans 24 Hour trophy has been returned to it’s rightful home in Dearborn, Michigan.

The car was piloted by Dan Gurney and A.J. Foyt and was prepared by Carroll Shelby and his Shelby-American race team.

Since Ford exited racing in 1970, the trophy has rested with an individual – who finally thought that after 45 years it was time the trophy returned home.

The Ford Mark IV had to have a ‘roof bubble’ fitted to fit Gurney’s tall (6’3″) frame and in the middle of the night, Gurney was famously hounded by the Ferrari of Hillman Imp project engineer, Mike Parkes. Parkes flashed his lights in Gurney’s mirrors for mile after mile, before Gurney simply pulled over to the side of the track – Parkes followed suit!

The trophy was returned to Edsel B. Ford II, a Board Member of the Ford Motor Company. After a period of restoration and curation, it will be re-united with the actual racecar – a key part of the museum’s Racing in America collection.

“It is a very important milestone for Ford to have this great and historic trophy returned to the Company,” said Ford.

“The win in the No. 1 Ford Mark IV with Gurney and Foyt was memorable in so many ways and proved beyond doubt that our dominant victory at Le Mans in 1966 was not a one-time occurrence.

“(The return of this trophy) gives us hope that one of these days the greatest missing artefact in our company’s racing history – my great-grandfather’s punch bowl trophy from 1901 – may someday be found as well.”