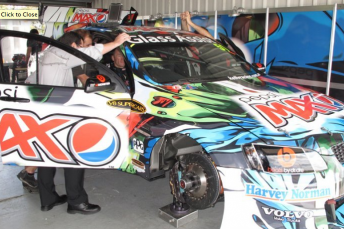 V8 Supercars teams have converged on Sandown for the second-annual pre-season test.

The test, which starts at 9am tomorrow, is compulsory for all 28 V8 Supercars entries.

Many of the teams are revealing new liveries for the 2012 season, while others will run interim looks before debuting their new schemes ahead of the opening event of the V8 Supercars Championship at the Clipsal 500 (March 1-4).

In news from Sandown, Greg Murphy’s Pepsi Max Crew Commodore VE will campaign in the original Pepsi look that it ran in the opening rounds of the 2011 championship. Murphy’s car will get a fresh look ahead of the Clipsal 500.

Tony D’Alberto’s team has yet to lock in a major sponsor, but is using the opportunity to promotes the team’s social media pages. CLICK HERE for more on D’Alberto’s Sandown scheme.

See below for a full gallery from some of the track activity at Sandown today.