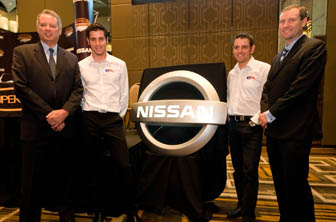 Rick Kelly says that become a factory race driver for the new Nissan Motorsport squad will bring more pressure to his family-owned team.

Kelly, his team and the Japanese powerhouse manufacturer announced today that they will compete in the 2013 V8 Supercars Championship in Nissan race cars, switching from Holden Commodore chassis.

It will be the first time that Rick Kelly will be full-fledged factory driver.

Speaking to Speedcafe.com at the launch today, Kelly says that Nissan is coming into the sport with one clear objective in mind.

“2011 for Kelly Racing was a breakthrough year to get three race wins. We certainly put ourselves in a position contend for third in the championship,” Kelly told Speedcafe.com.

“Nissan is coming on board to win races, they made that very clear today.

“Obviously our objective is to win races as well, and their support is going to make it possible for 2013.”

See below for video with Kelly from today’s launch.