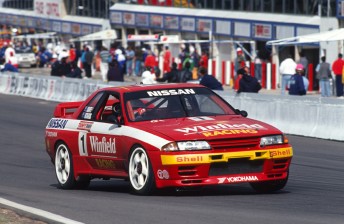 Nissan has confirmed that it will enter the V8 Supercars Championship in 2013 with Kelly Racing.

The Japanese manufacturer made the announcement in a press conference at Melbourne’s Crown Casino this morning.

Nissan is the first manufacturer to confirm its entry into the sport under the new for 2013 Car of the Future regulations.

It is not yet known which Nissan model will be used in the V8 Supercars program, although the company confirmed that it will use an ‘all-new’ sedan model.

Kelly Racing will be known as Nissan Motorsport from 2013, with all four of its cars expected to carry factory Nissan colours.

The team will continue to develop its own chassis and engines from its Braeside, Melbourne, base, but will do so with input from Nissan’s global performance arm NISMO.

The length of the deal between Kelly Racing and Nissan has not been disclosed, although it is being described by Nissan as a ‘long-term’ program.

Nissan Australia managing director Dan Thompson said that the V8 Supercars program will play an important role in the company’s future in the country.

“Nissan believes that, alongside Ford and Holden, we possess the most convincing motorsport DNA and track history in Australia, making a V8 Supercars debut in 2013 an obvious initiative,” said Thompson. 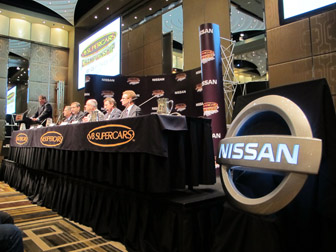 The announcement being made at Crown Casino

“We are targeting No.1 importer status in Australia and already making progress towards that as one of the country’s fastest growing brands. V8 Supercars will boost that momentum.”

Kelly Racing driver and co-owner Rick Kelly says that the new deal is an important step in the team’s plan to become a dominant force in V8 Supercars.

“I couldn’t be more excited with the opportunity Nissan has offered Todd, myself and the entire team at Kelly Racing to become their official factory team,” he said.

“Nissan’s genuine enthusiasm, unwavering support and absolute professionalism through this evaluation has been tremendous and underpins their absolute intentions of Championship success in the category – a dream we share and hope to deliver on.

“This new partnership has only been made possible by the endless amount of hard work that John Crennan has done for Kelly Racing on this project, and that of Ian Moreillon, Jeff Fisher and the team at Nissan of which Todd and I are very grateful.

“The Nissan Car of the Future (COTF) project is a huge undertaking however Todd and I are firmly focused on the job at hand this season ensuring that Kelly Racing takes those important steps forward on and off the race track.

“Development of our cars and recruitment of key personnel in the off-season should assist us to realise these immediate goals.

“This new partnership brings with it a host of opportunities for the team, our business partners and of course fans and delivers the vision that we have shared since our inception in the category in 2009.”