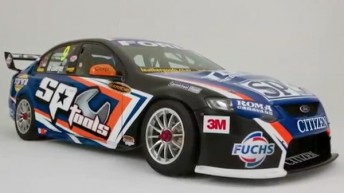 The Kiwi star released the first images of his new-look race car by publishing a video on SP Tools’ YouTube page (below).

Van Gisbergen will compete in his fifth full season of V8 Supercars competition this year, coming off the back of his best championship result last year (fourth). His 2011 season saw him take two race wins.

The SP Tools Falcon will be seen for the first time at Sandown this weekend for the all-in pre-season test at Sandown.

Public entry to the test will cost a gold coin donation.

See below for video of Shane van Gisbergen’s studio unveil.