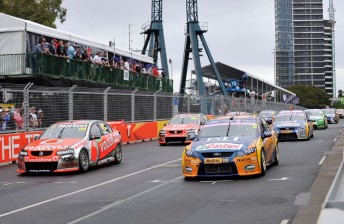 The V8 Supercars field at the 2011 season finale

V8 Supercars will make “one of the most significant announcements in the history of the sport” tomorrow.

In a short statement released today, V8 Supercars has announced that it will hold a press conference in Melbourne tomorrow to reveal something that, according to the statement, is “years in the planning and is certain to surprise.”

Senior V8 Supercar executives, including chairman Tony Cochrane and CEO David Malone, will be joined by several special guests to make the announcement at 11am AEST.

V8 Supercars is refusing to make further comment on the matter until that time.

Stick with Speedcafe.com for the latest news …