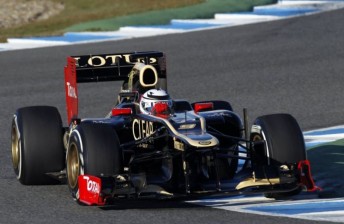 Raikkonen in the new Lotus E20

Kimi Raikkonen has made a promising start to his Formula One comeback by topping the season’s first test day at Jerez.

The Finn lapped the circuit in 1m19.670s during the morning’s running – a time that would not be beaten over the remainder of the day.

Both Australians stuck minor problems during the day, with the Red Bull late onto the circuit after its rear wing failed to arrive on time, while the Toro Rosso brought out a red flag in the afternoon with a loss of oil pressure.

Despite the initial set-back, Mark Webber said he was pleased with his impressions of the RB8.

“I feel good in the car,” said Webber. “It’s doing pretty much everything that we expected, which is always nice. There’s no nasty surprises.

“It’s incredibly early in the concept of the car, obviously. A lot of questions still, a lot of things to go through, a lot of directions, a lot of ideas to work out what we need to do to put together a full championship, not just here at Jerez, but doing well for the whole season.”

Nine of the 12 Formula One teams have brought their 2012-specification cars to the Jerez test, with Mercedes and Hispania still running last year’s models.

Marussia F1 (formerly Virgin Racing) is the only squad not present at the first test, having decided to focus on finishing its new machine .