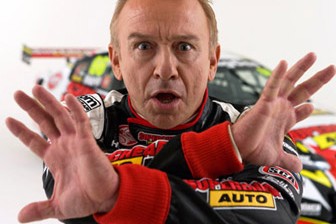 Get out of the way Russell! The Supercheap Auto driver will get out of this shot on Friday morning at Sandown

Ingall, who moves to Walkinshaw Racing this year, will take the covers off his new ride at 11am at the Melbourne circuit.

As a tease to the public, ‘The Enforcer’ took this cheeky ‘No Photos Allowed’ image at the team’s recent photo shoot.

Friday morning will be a busy time for unveilings, with Shane van Gisbergen’s SP Tools Falcon also set to be revealed.

All 28 V8 Supercars teams will be in attendance at the compulsory pre-season test, most of which will be running around the 3.1km track with their new-look race cars.

Some teams, though, have elected to delay their season launches. Jim Beam Racing, Jack Daniel’s Racing, Tony D’Alberto Racing and Lucas Dumbrell Motorsport will all display interim looks at Sandown.

These four teams will unveil their 2012 schemes closer towards the first round of the V8 Supercars Championship at the Clipsal 500 on March 1-4.

Testing this Saturday will start at 9am at Sandown. The public can enter for a gold coin donation, with an hour-long grid walk to be held at 12.30pm.

Meanwhile, V8 Supercars will hold a major press conference this morning at Melbourne’s Crown Casino. CLICK HERE for last night’s breaking news story on what is set to be announced today …