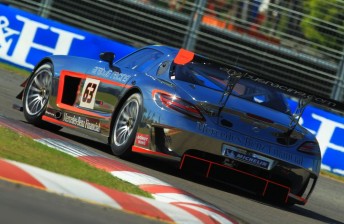 The Clipsal 500 will see the new look Australian GT Championship get off to a flying start with 30 examples of exotica – representing 11 marques set to take to Adelaide’s streets.

Three Ferrari 458 Italia GT3’s will be part of the field, John Bowe – with Peter Edwards, Alan Simonsen – with Nick O’Halloran and Tony Quinn will each pilot examples of the Prancing Horse.

With the series opening up it’s specifications to allow cars compatible to the ever-growing FIA GT3, it will allow cars such as the Ferrari, Lamborghini LP600 and Mercedes-Benz AMG SLS GT3 to compete to their ‘as factory built’ specs.

The event will be the first time that James Brock will be seen in one of Erebus Racing’s SLS GT3 ‘Gullwings’ – alongside Peter Hackett. Meantime no less than four Moslers – including the car developer, Martin Short from the UK, an Audi R8 GT3 with Warren Luff joining Mark Eddy – Corvettes, a Viper, Porsches and the Australian debut of Adelaide racer, Kevin Weeks’ Supaloc Ford GT.

The GT Challenge category will feature a Ferrari versus Porsche battle – including a number of Asian GT3 competitors making the trek downunder, whilst the Trophy division will feature two Lamborghinis, a Lotus Exige and a Porsche 997 GT3 S.

The Clipsal 500 is held on the streets of Adelaide between March 1-4.