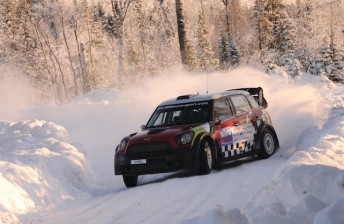 Prodrive will remain part of the Mini fold in the WRC

BMW Group has confirmed that Mini’s involvement with Prodrive has been reduced from a full factory funded squad to the status of a works-supported private team in the World Rally Championship.

The decision means that the Prodrive-run squad, that includes second place finisher at the Rally Monte Carlo Dani Sordo, will be regarded at the same level as the Motorsport Italia-run WRC Team Mini Portugal of Armindo Araujo and Paulo Nobre.

Prodrive, which also operates Ford Performance Racing and Ford Performance Vehicles in Australia, will retain responsibility for construction and support of Mini John Cooper Works WRC customer cars, while working with the BMW Group on the further development of the car. The long-term homologation of the Mini has been underwritten until 2018.

“We remain convinced that the sport of rallying is perfectly suited to our brand,” said Dr Kay Segler, Mini’s senior vice-president of business coordination and brand management.

“The situation we now find ourselves in means the Mini Motorsport family can, and will, continue to grow on the rally scene. I am confident that our customer teams around the world will continue to thrill Mini fans with this car over the coming years.”

After speculation that it could have any deal with BMW terminated, an upbeat Prodrive chairman David Richards believes Mini’s announcement is good news for his organisation.

“Fundamentally, the nature of the relationship between Prodrive and Mini will not change,” said Richards.

The Prodrive-run Mini team will contest this week’s Rally Sweden with Sordo and Patrik Sandell driving.

Of far greater uncertainty is international television coverage of this week’s only true winter rally, after the FIA confirmed negotiations with Eurosport about telecasting and promoting the WRC had broken down. The FIA has advised that at this stage it is up to each individual event promoter to arrange the international TV production.

Svenska Rally AB had already arranged local TV coverage in Sweden, but it is now scrambling to sort a separate international deal and of most concern is the funding of this separate production.

“Finnish company Filmworks, which has produced TV broadcasts from the WRC for five years running, is prepared to come to Sweden on short notice, but we cannot make any decisions regarding production until we have secured that the revenues are in parity with the costs,” said Rally Sweden CEO Glenn Olsson.

Television from the Rally Monte Carlo was produced by Eurosport and screened on its Australian pay TV channel. It appears highly unlikely that Australian viewers will see coverage of Rally Sweden until well after the event’s running, aside from news coverage.