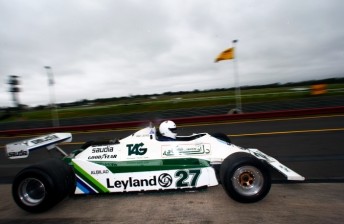 The streets of Adelaide will once again come to life with the sound of a Formula One car when Alan Jones’ 1980 Williams FW07B takes to the track during the Clipsal 500.

The car will be demonstrated on the circuit each day of the event by its owner Paul Faulkner in the presence of Alan Jones MBE who is to be a special guest at this year’s opening round of the 2012 V8 Supercars Championship.

“I am delighted to be coming to South Australia for the Clipsal 500 Adelaide and to be re-united with my World Championship winning car and to see and hear it run once again will not only be special for the fans, but believe me it will be a special occasion for me also,” said Alan Jones.

Jones will also be seen on the circuit each day demonstrating one of the world’s newest and greatest road going ‘supercars’, the Lexus LFA.

“Alan (Jones) did the inaugural lap in anger on the Adelaide circuit way back in 1985 when the Formula One teams allowed him out of pit lane in lead position in recognition of the Aussie World Champion competing in the first Formula 1 World Championship race held on Australian soil,” said Clipsal 500 Adelaide Chief Executive Mark Warren.

“Our circuit was also the scene of Alan’s last ever Grand Prix race in 1986, so the historical significance of having both Jones and his World Championship Williams FW07B together in Adelaide cannot be over-stated.

“It’s worth the price of a ticket alone, and we will be having special sessions each day so fans can photograph the two legends (car and driver) together and perhaps get an autograph”.