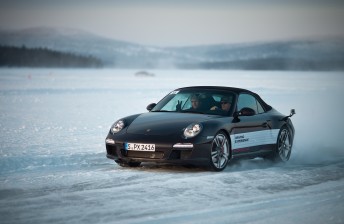 Daniel Gaunt and Paul Kelly were cool as ice in Finland

If one of the 2012 Porsche City Index Carrera Cup rounds suddenly has a dump of snow, a group of the leading drivers will be well prepared after taking part in ice road training in Finland.

Hot sticky tarmac was traded for frozen lakes in temperatures falling to -32 degrees with Jonny Reid, Daniel Gaunt, Max Twigg, Paul Kelly and Marc Cini all getting behind the wheel outside for the three-day intensive Porsche driving program, Ice-Force.

Located 300 km north of the Arctic Circle, Ivalo is home to the Porsche Driving Experience Center where the Porsche drivers were rewarded for their efforts in the 2011 Porsche City Index Carrera Cup Australia season.

For Gaunt, Reid, Twigg and Kelly, the adventure was the drivers’ prize for finishing in the top three in either the Professional Class or Elite Class in the 2011 Porsche City Index Carrera Cup Australia season, which included return Business Class travel to Finland.

Gaunt, who finished third outright in the 2011 Carrera Cup season, said Ice-Force was the perfect way to celebrate his top three finish in the Professional Class last year.

“The trip was a once in a lifetime opportunity and an unbelievable prize,” said Gaunt.

“Ice-Force was a huge learning experience as it’s such a unique discipline driving with spiked tyres on ice; you have to be gentle with everything, which is completely different to driving a Carrera Cup car in Australia.

“It’s obviously pretty special driving these cars on any occasion, but especially on ice in Finland.”