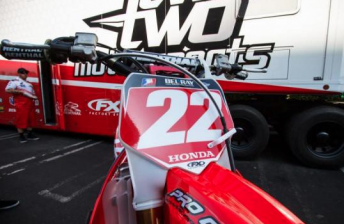 TwoTwo Motorsports/Bel-Ray Racing’s Chad Reed has fought off a stomach bug to finish a credible third at the fifth round of the Monster Energy AMA Supercross at Anaheim’s Angel Stadium.

The Australian, who was struck down with a stomach virus in the days leading up to the event, struggled throughout practice and qualifying.

While he wasn’t able to push as hard as he would have liked, Reed rode two solid races finishing his heat second before taking third in the ‘Main Event’ behind winner and title leader Ryan Villopoto and James Stewart.

“I was happy with third tonight as I have been throwing up the last few days and just felt awful,” Reed said.

“Today was tough, I tried to honour all my fan and sponsor obligations but I felt wiped out.

“In the main I got a good start and passed Ryan for the lead on the opening lap. He passed me back and then I lost a spot to James.

“I tried to put the pressure on him towards the end of the race but I just didn’t have anything left in the tank.”

Reed will recuperate ahead of the sixth round of the 2012 Monster Energy AMA Supercross, an FIM World Championship, at San Deigos’s Qualcomm Stadium on Saturday February 11.