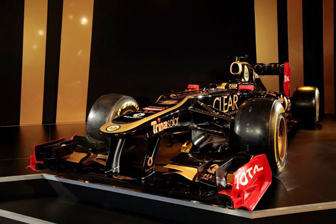 The car was unveiled online from the team’s Enstone factory, continuing with the famous black and gold Lotus livery that it carried last season.

The new car features a new name, with the ‘E20’ commemorating the 20th chassis designed at the team’s Enstone base through its Toleman, Benetton, Renault F1 Team and Lotus Renault GP heritage.

The new E20 features a range of new features, including the ‘step’ on its nose.

The front and rear suspension layouts have been revised in the quest for better aerodynamic efficiency while the front wing is a continuation of design concepts used in past seasons.

After finishing a distant fifth in the 2011 Constructors Championship, Lotus team principal Eric Boullier says that the team is aiming for fourth place in this year’s world title fight.

“Obviously 2012 is very welcome after a poor 2011 and very hectic year,” said Boullier.

“It’s clear we’ve maintained our ambition on track and we want to carry on the full restructuring, progress and change that we started one year ago.

“We now have a clear target. We know that we have a strong commitment from our shareholders, that we want to be a top team and seen as a top team.

“2012 will be the year of our final adjustment to be ready and fully operational from 2013 with an ambitious plan. For 2012 we expect to be in a position to fight for fourth place for the championship.”