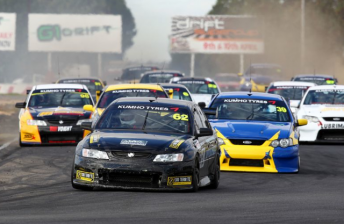 Jane Jr will drive a Ford Falcon BA for Victorian-based Image Racing in the six-round national series, which starts at Sydney’s Eastern Creek Raceway on March 9-11.

The addition of Jane to the Image Racing line-up means that team principal – and reigning Kumho Series Champion – Terry Wyhoon, will not drive in the 2012 series, instead electing to focus on the progression of his expanding team.

The team, which is in the final stages of completing a brand new workshop in Korumburra in southeast Victoria, will prepare four cars in this year’s Kumho Series for Jane, Mark Shepherd, Michael Hector and Michael Bartsch.

While the youngster has a famous surname, the Falcon that Jane will race is also packed with V8 Supercars history.

It is the very same ex-Stone Brothers Racing Ford driven by Russell Ingall in his now-infamous ‘road rage’ stoush with Mark Skaife at Eastern Creek in 2003.

Ingall also drove the car to second place in the 2004 V8 Supercars Championship, completing a 1-2 result that year for Stone Brothers Racing with now-NASCAR star Marcos Ambrose crowned as champion.