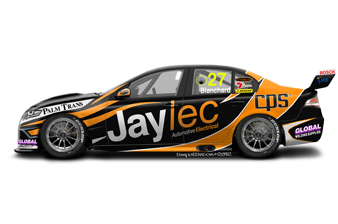 Blanchard, a former race and round winner in the Development Series, drove the FG at Winton prior to Christmas and is looking forward to the season ahead.

“While we were really focussing on a move to the main game, we never lost sight of the importance of ensuring the best possible package for the Development Series. With Matthew White’s team stepping up to the FG and building a strong alliance with the FPR team, it presented an opportunity to really fight for the Championship this year.

“I know all the guys at MW Motorsport and having a second season with the team in the Jaylec FG should see us at the pointy end.”

MW Motorsport boss Matthew White said that securing an FG – and Blanchard – was key to fighting for the title.

“I was very keen to upgrade to the FG, but would only do so with the right package and driver,” he said.

“Getting Tim in the car for his second year with us gives our team a great base to start at Clipsal in a winning frame of mind. With some off season rule changes as well in the mix, it is shaping up a very competitive year.”

The Development Series will run over seven rounds, commencing in March at the Clipsal 500.