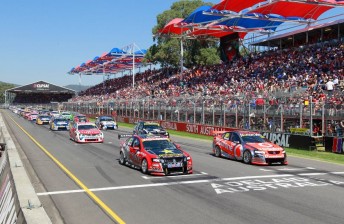 The Nine Network has joined the race to broadcast the V8 Supercars Championship from 2013.

According to a report in today’s Sunday Telegraph, V8 Supercar officials have held talks with both Nine and Network Ten over a potential move away from current broadcaster the Seven Network.

While the current six-year deal with Seven is worth an approximate $168 million, the paper claims that a new five-year deal could be worth up to $300 million, and quotes a ‘well-placed V8 official’ on the matter.

“Nine are definitely interested and we are talking to them,” said the source.

“All of the major free-to-air networks are interested, as is pay TV.”

It is also suggested that V8 Supercars is considering selling off its properties separately in a bid to maximum its revenues from its next television deal.

This means that a blue-chip event like Bathurst could be sold to one network, with another picking up the rest of the series.

Nine is the longstanding broadcaster of the National Rugby League on free-to-air television and was for over 20 years the broadcaster of Formula One. It also telecast the two-litre Super Tourers in the mid 1990s.

Although Nine is currently in the process of sorting its next NRL deal, it does not currently broadcast Saturday games, while its Sunday telecast begins at 4pm, theoretically making the V8s an attractive proposition.

Interestingly, the news of a potential ‘bidding war’ for V8 Supercars’ television rights has been leaked within a week of a landmark court ruling regarding online media rights that threatens to cost the championship millions of dollars.

CLICK HERE for more on the online media rights situation