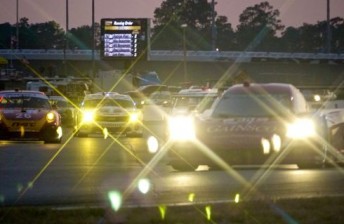 Versatile Australian driver Cameron McConville is eyeing a seat in next year’s Dayonta 24 Hour race following a recent trip to the 2012 event.

The 38-year-old retired from full-time V8 Supercars driving at the end of 2009, and currently competes in both the V8 Supercars endurance races and V8 Utes Series for Walkinshaw Racing.

McConville will drive a Lamborghini Gallardo alongside Ted Huglin, Peter Kox and Luke Searle in this month’s Armor All Bathurst 12 Hour, and says a drive in a GT car at Daytona is a highly appealing prospect. “The Daytona 24 Hour has long been one of those boxes that I wanted to tick, especially now that I’m more an endurance specialist,” McConville told Speedcafe.com.

“I’d love to do it next year, more than likely in a GT car, but I’ve just got to keep in touch with the guys I met over there and see if something can be sorted for next year.

“Now that I’ve driven other things like the Lambo, I’ve realised that GT cars are so much fun to drive. They’re easy to drive and they’re rewarding to drive.

“To go over and see that event, I was blown away by how big the event is over there. It looks like a lot of fun, and that’s what I’m trying to make my motor racing these days.”

McConville has previous experience of the Daytona road course having completed the pre-event ‘Roar before the 24’ test with the now defunct Skea Racing International Porsche team in 2000.