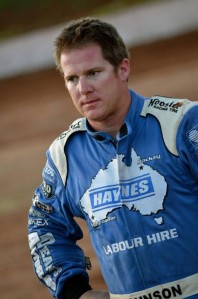 Johnson had to work hard for the win at the southern WA racetrack – the first time that Albany has hosted a World Series round. He was in a battle with Series leader, James McFadden, but was able to see off the youngster’s advances.

By finishing second, McFadden has all but secured himself the Series victory with just a few nights of competition left. McFadden had strong support in the crowd, with the Totally Workwear car emanating from WA.

Finishing a strong third was Kerry Madsen aboard the Kendrick Racing 92.9 car, also based in WA. He led into turn one, but washed up track and drifted into the mid-pack. He had to fight his way forward to wind up on the podium. Max Dumesny and David Murcott rounded out the top five.

Johnson now moves into third in the Series points chase.

“I knew we had some good car speed and I could judge my own speed by the way he (James) was driving,” Johnson said. “We could get into the turns really nice and make up some ground each time. The HM Racing Team gave me an excellent car and I’m pleased for the whole team we could get this win in a town like this that has worked so hard to make this event successful.”