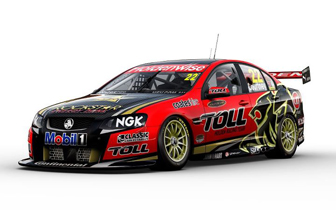 The Toll Holden Racing Team has unveiled its livery for the 2012 V8 Supercars Championship.

Team drivers Garth Tander and James Courtney took the covers off the factory Holden entries, complete with new gold flashes on the front and side of the Commodore VE, plus a carbon black bonnet.

The car was unveiled exclusive to the Seven Network’s 6pm news service.

The team’s Commodores also display increased backing from Coates Hire which is located on the front quarter panels.

One notable change is the end of its long standing deal with Bridgestone. Continental Tyres has moved in as the team’s new tyre backer.

Tander remains in car #2 for the season, while Courtney will compete under the #22 after relinquishing his #1 status to TeamVodafone’s Jamie Whincup.

The unveiling of the new look is the first part of a two-stage launch strategy. Stage two will be a corporate season launch on Thursday, February 16.

See below for Network Seven’s coverage of the livery launch.