V8 Supercars CEO David Malone has described this week’s Federal Court ruling permitting Optus to stream football matches over the internet within two minutes of being broadcast on television as a ‘major concern’.

The landmark case, fought out between Optus and the NRL/AFL football codes, surrounded an application introduced by the Singaporean-owned telecommunications company that allows its customers to record free-to-air television and then stream it onto their smart phones and tablets.

While Telstra has an exclusive online broadcasting deal with both the NRL and the AFL, the court cited the fact that the user, rather than Optus, instigates the recording and transmission of the broadcasts when operating the app, upon ruling that the app does not breach the rights holder’s copyright on the material.

Telstra, which recently signed a $153 million deal for the exclusive online broadcast rights to AFL matches for the next five years, yesterday slammed the ruling, saying that it is “seriously out of step with the reality of the market.”

Telstra also holds the online broadcast rights deal for the V8 Supercars, which is believed to be worth up to $4 million a year to the category.

The deals for both the NRL and the V8 Supercars are set to expire at the end of this year, leading to grave concerns from both sports about the consequences of the court’s decision. 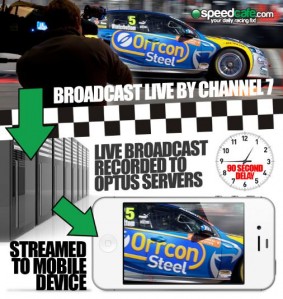 A schematic showing how the Optus app works

“The overall concern is that this ruling has the impact of potentially devaluing sports rights,” Malone told Speedcafe.com.

“That’s bad for the sports, bad for fans and bad for participants. It’s obviously a major concern.

“Media rights are important to all sports, and we need to be able to be in a position to be able to sell those rights on an exclusive basis, as we have in the past.

“Whether that be free-to-air rights, subscription rights or rights in the digital space, which is of course very much a developing area, then we need to have clarity (on what is lawful).”

Not surprisingly, Optus welcomed the court’s decision, describing it as a “major win for consumers, innovation and law.”

“For us it’s always been about free-to-air television, recording it and playing it back at a time more convenient, that’s how we developed the product,” said a spokeswoman for the company.

While both the AFL and the NRL have indicated that they will appeal the ruling, Malone says that V8 Supercars “hasn’t made a decision at this point” on whether it will take part in any further action.