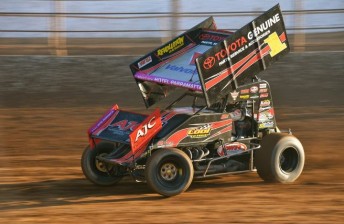 Brooke Tatnell’s run of form has continued at Kalgoorlie International Raceway in taking his second Hi-Tec Oils World Series Sprintcars event victory of the 2011/2012 season in a mid week thriller.

Tatnell admits though that he was handed a ‘get out of gaol free’ card by Shane Stewart, who was handsomely leading on the dusty, slick, single-lane Goldfields circuit.

Stewart – driving the Miracle Recreation Equipment Monte Motorsport machine – was looking on for the win, until Albury’s Grant Anderson spun late in the race, leaving the American champion nowhere to go but into the emerging star.

Madsen tried his best to run down Tatnell but when the rubber brought the bottom line out there was no way he could run down the five times Aussie champ in front of him.