Two separate Kumho V8 Touring Cars Series teams will pay special tribute to Jason Richards, by restoring their cars to the liveries as campaigned by the late Kiwi.

THR Developments and Poll Performance Racing are both racing cars that were raced by Richards during his V8 Supercars career.

The Adelaide based THR team possesses the 2003 #45 Team Dynamik Commodore VY. It was restored to it’s original livery last year and will carry that theme through in 2012.

“We will keep the same livery on the car as Jason raced it – it was always our intention to do that,” said Nick Taddeo – THR co-owner. “Whoever drives the car throughout the season’s sponsors will fit around that.”

The Poll Performance team has the former Tasman Motorsport car that raced in the striking orange black and white colours in 2006.

“With the passing of JR, I thought it timely as a tribute to a nice bloke,” said Poll Performance owner, Jim Pollicina. 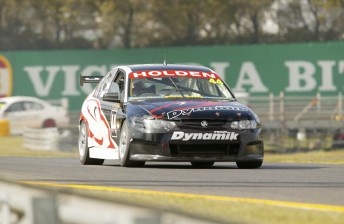