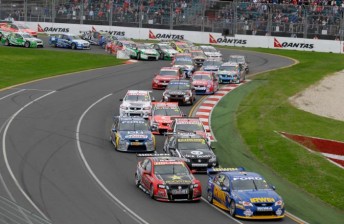 The V8 Supercars field at the 2011 AGP meeting

Initially scheduled to repeat last year’s format of three 133km affairs, this year will see practice and qualifying on Thursday, two races on Friday and one each on Saturday and Sunday. A top 10 shootout will not be held.

A toal of eight hard and 12 soft compound tyres have been allocated for the event.

As debuted in 2011, the V8 Supercars will again have their own pitlane at Albert Park, although according to V8 Supercars media manager Cole Hutchcock, the race format may not be as simple as the one-pitstop per race requirement seen last year.

“The final format will be confirmed in the coming weeks,” Hitchcock told Speedcafe.com.

“We’re looking at a couple of options in order to spice up the show.” 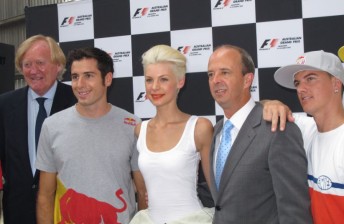 The 2012 AGP was officially launched in Docklands, Melbourne today, where model Kate Peck and Pepsi Max Crew driver Greg Murphy were named as the event Ambassador and Motorsport Ambassador respectively.

“We look forward to welcoming back the V8 Supercars,” said Westacott.

“The introduction of the new pit lane corporate facility, full pit stops and garages was a tremendous success in 2011.”

The Porsche City Index Carrera Cup will also be on the support program, while the Group A and C touring cars will be seen at Albert Park for the first time.

Other on-track entertainment will include the return of the Red Bull race-off, a speed comparison and performances from the ‘Crusty Demons’ motorcycle stunt team.

The 2012 Australian Grand Prix will take place across the March 15-18 weekend.

Speedcafe.com will host its own Speedsuite hospitality experience at the AGP this year. CLICK HERE for more details.