McLaughlin signs with Tekno for enduros

McLaughlin signs with Tekno for enduros 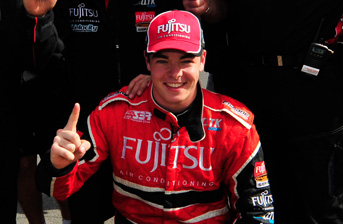 Scott McLaughlin will compete with Jonathon Webb in the V8 Supercars endurance races this year.

McLaughlin, 18, will partner Webb in the #19 Tekno Autosports Commodore VE in what will be the young Gold Coaster’s V8 endurance debut.

After finishing fourth in the 2011 Development Series with Stone Brothers Racing, McLaughlin was tipped as one of the leading candidates for the drive at Garry Rogers Motorsport, but has dropped out of the running and will focus on another season in the Development Series with Fujitsu backing. It he has not been confirmed which team he will race with.

Webb’s V8 Supercars team will expand and change in 2012, adding a second car to its team, as well as switching from Ford to Holdens.

Tekno is yet to announce its second driver, with leading Carrera Cup driver Michael Patrizi tipped to secure the seat.

McLaughlin says that he is thrilled to be joining the expanding team.

“In early 2009, Bruce (Jenkins, team manager) engineered me in WA when I was competing in a handful of Formula Ford events in order to close out my CAMS license,” he said.

“When he arrived to head up Tekno last year we started talking again, then earlier this year Bruce and I met for bit of a chat and we’ve been exploring the co-driving role ever since.

“In addition to the planned expansion to two cars, when it became clear that it was alongside Webby, I jumped at the chance to partner him.

“The whole Tekno team is currently working through a big program of change and it’s exciting to think I will be driving alongside a former V8 Supercar race-winner – and also in a Triple Eight-built Commodore.

“Webby and I are a similar size, which is important, and the team are going to give me every chance to get right up to speed during the year – I couldn’t be happier and can’t wait to have my first run.”

“I’ve been keeping a close eye on Scott for a couple years now and think he is a genuine star of the future,” Jenkins said.

“His results to date, particularly at such a young age speak for themselves and he brings excitement and enthusiasm to the team which is what we are about.”

This year’s V8 Supercars endurance races will be held at Sandown and Bathurst.