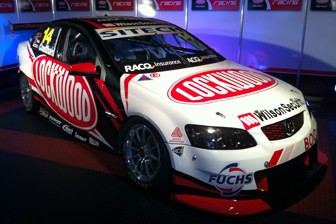 Brad Jones Racing has secured Lockwood as a new naming-rights supporter to its V8 Supercars team.

Coulthard and the BJR revealed the look of the Commodore, as well as the team’s mascot, today at Lockwood’s parent company’s head office (ASSA ABLOY) in Oakleigh, Victoria.

World-leading lock group ASSA ABLOY has stepped into the role of title sponsor after being a minor sponsor of the team last year.

Coulthard raced for Walkinshaw Racing last year but is looking forward to his new partnership with BJR and Lockwood.

“It’s a pretty exciting time, having a new team, new sponsor and new car . I just can’t wait to get the season underway and get some results,” Coulthard said.

“Lockwood is full of very passionate people, who are obviously very into their racing. They’ve got a lot of ideas about what they should do and I’m just so happy to work with them. It sounds like it’s going to be fun and we’ll both benefit.”