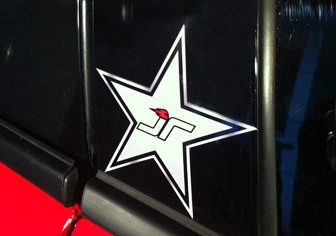 Former team driver Richards, who died in December from an agressive form of cancer, will be represented on each of the team car’s b-pillars, identified by the ‘JR’ star logo.

The concept is similar to the Williams Formula One team which, to this day, competed with ‘Senna’ logos in the cockpit of each car, honouring Ayrton Senna who died in one of the team’s car at Imola in 1994.

Team owner Kim Jones says that for as long as Brad Jones Racing runs a V8 Supercars team, ‘JR’ will ride with them.

“It’s something that we’re developing and there will be something else come along in the future, but as a start, we wanted to have every BJR V8 with the Jason Richards star on it,” Jones told Speedcafe.com.

“He was very much part of our family and part of our team – as Charlotte (Richards’ wife) is too.

“It’s something we wanted to do as a group and everyone is supportive of it.

“JR was always a part of our team, whether he was driving or not, and now, this is a legacy that will go as long as Brad Jones Racing exists.”

The team unveiled the special ‘JR star’ tribute at the launch of the team’s new Lockwood Racing entry, to be driven by Fabian Coulthard.

CLICK HERE for more on the launch of Lockwood Racing.