Tatnell had ‘legends riding with him’

Tatnell had ‘legends riding with him’ 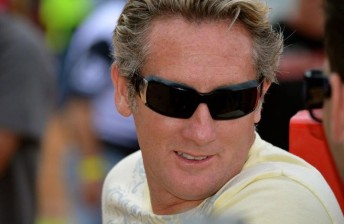 Brooke Tatnell has spoken of the strength he drew from late legends, his father George and former Rowley Park promoter, Kym Bonython in winning his fifth Australian Sprintcar crown in Adelaide.

“I said a prayer to Dad and also Kym Bonython ahead of the race and they were riding with me,” said Tatnell. “I wanted to win this one so badly and I was able to get the job done. It is a win that means a lot, especially in Adelaide, as this track means so much to me and my family and with it being the 50th Australian Title.

“To have my wife and children here, who I’ve dragged halfway around the world and my mum and uncle Joe, it’s special. I will remember this win for a long, long time to come.”

Tatnell’s legendary father, George – who lost his battle with cancer in 2007 – won his only Australian Sprintcar Title at the venue and maintained a tight friendship with Bonython – the bon vivant former promoter of Rowley Park Speedway and the patron of the Speedway Park (now Speedway City – that hosted the 50th Australian Title) venue – who passed away on the weekend of the Clipsal 500 last year.

Driving for West Australian team,  Krikke Motorsport, the Minnesota based Sydney-sider spoke of his admiration for the team in an emotional victory ceremony.

“They are the best team in the world at doing this (Sprintcar racing) and Pete (Caporn – Crew Chief) is the best at what he does, anywhere,” Tatnell said.

Ironically, it took nearly 20 years of trying for Tatnell to win his first ever Australian Title and now he has five to his credit and is closing in on both rival, Garry Brazier’s seven and the legendary Garry Rush’s 10 Australian Championships.

“I’m not thinking about Garry Rush’s record, I just love this event and team and am going out there to do the best that I can do,” he said. “If I can do what Rush did, that’s fantastic, but it’s not a focus for me right now. You couldn’t have scripted this any better.”

Tatnell will return to World Series Sprintcars competition in the Krikke Motorsport home state of WA at Kalgoorlie International Raceway on February 1.